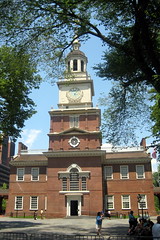 Douglass North, the Nobel prize-winning economic historian, defined “institutions” as the humanly devised rules of the game that shape and direct human interactions.  The institutions of a nation and its people are the set of norms, values, rules, and laws that guide their choices and govern their disagreements.

This class is an introduction to the values and institutions of American politics.  In a way, it is an overview of a period of American political history, from 1770 through 1840.  But it is also an introduction to the political thought that animated larger events, including the two great revolutions of the 18th century, in America and France.  And it examines the creation of institutions that celebrated human freedom, while guaranteeing the “freedom” of some to keep others in human bondage.

The evaluation in the course will consist of attendance, two midterms, and a final, as well as a 1,200 word argumentative essay.

There are two main themes that organize the class.  We will return to the interplay between these themes over and over during the semester.

The texts for the course are available in the bookstore:

Attendance in class is expected.  Pop quizzes will routinely be given.  The subject of the quizzes will be drawn equally from the readings and lectures.

Grades for this class will be derived from the students’ performance on two midterm exams, a final exam, attendance, and a 1,200 word argumentative essay.   These will have the following weights:

These papers will be graded on both content and style, and will be discussed further in class at the beginning of the semester.  Must be typed.  1,200 word maximum.

The nature of the participation grades will be discussed more in class.  You are expected to attend class, and to participate by asking and answering questions.  And your performance on “pop” quizzes will form an important part of your participation grade.

Schedule of Classes and Readings